BTS V (Kim Taehyung) selected as one of the Top 10 global influencer on Instagram.

On the 30th, BTS V became the first Korean male celebrity to become the ‘Top 10 Most Influential People on Instagram’, reaffirming the reputation of the ‘Social King’, according to ranking of the influencer marketing platform ‘HypeAuditor’.

In this chart, which quantifies marketing influence by evaluating the activity and quality of followers, V became the first Korean male entertainer to enter the top 10, as well as ranking first in Asian men and third in male celebrities around the world.

BTS V‘s Instagram account has the highest number of average Likes worldwide and the highest level of follower activity which makes hin the Top influencer. 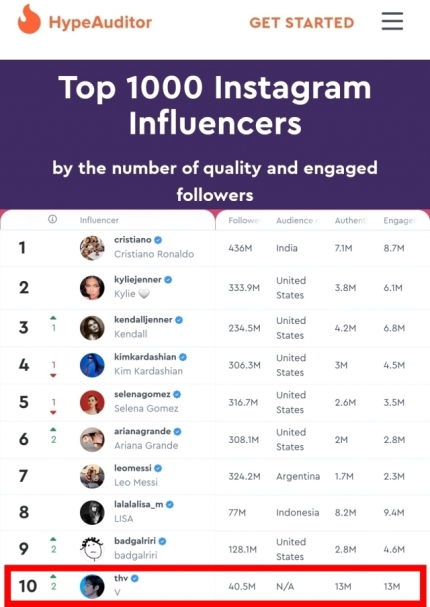 Recently, a video of BTS V enjoying ‘Dance’ alone at a jazz bar ahead of his Las Vegas performance, surpassed 10 million views in 4 hours and 20 million views in 13 hours, making it the fastest number of views in Asia and the second highest in history in the world.

The first place was a thank-you video sent to fans by Cristiano Ronaldo when he left Juventus in August 2021, recording 20 million views in two hours.

As such, V’s social influence has a fast reaction speed and explosive cohesion compared to followers. If he shows this level of impact with 40 million followers within 4 months of creating an account, the ripple effect of having more than 100 million followers is beyond imagination.

The Instagram account of BTS member V (Kim Taehyung) has already surpassed all surviving stars around the world and ranked first in brand value.