Jungkook released the music video teaser for the new song ‘Left and Right‘, a collaboration song with Charlie Puth, through his Instagram at the dawn of 24th June.

The released teaser video for ‘Left and Right’ is about 24 seconds long, and the natural combination of the two in the video, as well as the voices of Jungkook and Charlie Puth, suitable for the song with a bright atmosphere, are impressive.

Jungkook and Charlie Puth cheerfully elevate the mood of the song with their free-spirited and bouncy personality that matches the bright and cool melody. 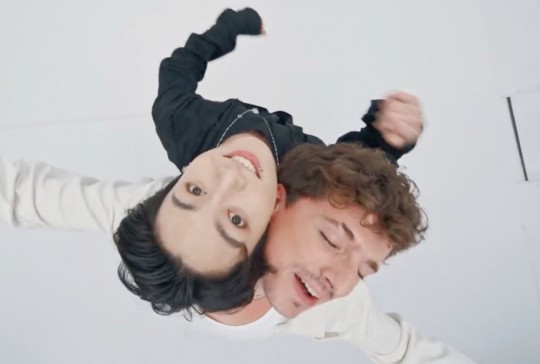 On the 24th, the Chinese fan club ‘Jungkook China‘ announced through Twitter that it would support advertising for Jungkook’s new song ‘Left and Right’ on ‘Spotify’.

‘Spotify’ is the world’s largest music platform and has a huge number of users around the world.

In response, Jungkook China announced that on the first day of the release of the song, they are running an advertisement on Spotify, which has relatively high coverage and receptivity, and said, “Please support our Jungkook a lot!”

The Chinese fan club also announced on Twitter that it would support Jungkook’s extra-large LED screen advertisement, which is broadcast 24 hours in Times Square, New York, from June 20 to June 26. In the advertisement, Jungkook’s innocence, cool, sexy and chic appearance, which stands out with a black and white concept, filled the screen, and the title of the collaboration song ‘LEFT & RIGHT’ was written in large letters to catch the eye.

In addition, ‘Jungkook China‘ will also support advertisements promoting ‘Left and Right’ on 11 radio programs of KBS and MBC from 7 am to dawn on June 24.