PSY has been working together with BTS member Suga for his new upcoming album song “That That“.

The agency, P Nation revealed on 26 April that BTS Suga collaborated with the PSY for a new song “That That,” PSY’s 9th full-length album. Suga co-produced “That That” with PSY, and took part in the overall production from writing the lyrics to composition and arrangement, as per the agency.

PSY unveiled a short teaser for the title track “That That” released on social media on April 26th, shows PSY wearing a cowboy outfit and running wildly toward the camera in the streets of a Western town as a sentimental guitar instrumental plays in the background.

And in the second teaser released on 27th, PSY opens the wooden door of whiskey bar and comes out with a more relaxed expression. Then, a part of the title track “2022, PSY Coming Back. That That I Like That” was presented with dynamic gestures. Through this, an exciting vibe unique to ‘That That‘ was foretold, raising the anticipation of fans around the world.

In the third teaser video, PSY and Suga enjoyed an exciting atmosphere with a lot of people and danced with excitement. With only a short teaser, the chemistry between the two people who have overcome the age difference is conveyed. 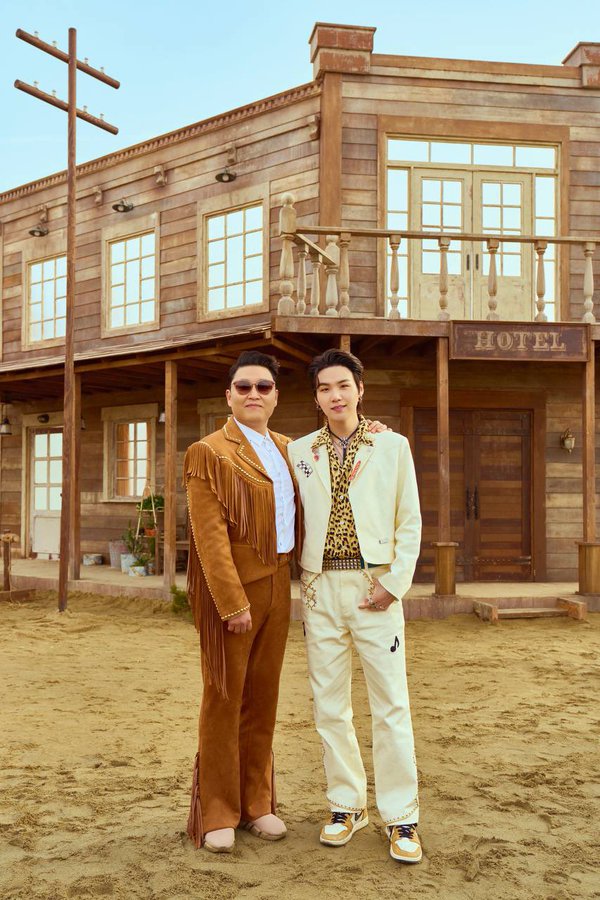 In another video both K-pop stars spoke about their experience of working together.
Working with the senior artist, Suga said he had initially felt “nervous.” But with time, he said the two musicians “became besties in a way that it felt like working with a childhood friend, so it made the whole song composition process that much more fun.”

The 44-year-old artist said he usually makes an effort so that younger artists do not feel uncomfortable around him, but with Suga, PSY said he barely felt the age gap.

“He wasn’t just my junior in the business but I felt he was truly my friend,” he said, adding, “If he thinks of me as a bestie, that’s great for me.”

In another interview video, Suga said, “I communicated a lot with PSY. I was only going to write a song and leave.” He smiled and said, “I didn’t know I would dance with PSY.”

At this, PSY said with a happy smile, “At first, we met because we wanted to produce, but after featuring, dancing, and appearing in a music video, we came in one step at a time”

“That That” is the latest track to be revealed from PSY’s upcoming album “PSY 9th,” which consists of 12 tracks all produced in collaboration with some of the biggest musicians in the K-pop industry. The upcoming record marks PSY’s return with a new full-length album in almost five years, since he dropped his eighth album, “4X2=8,” in 2017 under his longtime agency YG Entertainment.

In 2018, PSY departed from YG and established his own label, P Nation, the following year. He soon signed with various artists, including Korean American rapper Jessi, K-pop soloist Hyuna and former member of boy band Pentagon, Dawn, and singer Heize.